About the Department of Civil Protection and Emergency Management

Civil Protection in Iceland falls under the Ministry of Justice (former Ministry of the Interior). Civil Protection responsibilities at the national level are delegated to the National Commissioner of the Icelandic Police (NCIP). The NCIP runs a Department of Civil Protection and Emergency Management which is responsible for daily administration of Civil Protection matters, maintains a national co-ordination/command centre which can be activated at any time and is also responsible for operating the centre in emergency situations. The NCIP is also responsible for monitoring and supporting research and studies related to risk factors and natural catastrophes, and co-ordination and support measures aimed at reducing risks of bodily harm.
The National Commissioner of the Icelandic Police takes decisions regarding civil protection alert levels at any given time, in consultation with the relevant regional police commissioner, if possible, and informs the Minister of Justice of these decisions. A state of emergency may be declared if an emergency is likely to occur, is imminent, or has occurred, or if similar circumstances apply. The NCIP operates a National Crisis Coordination Centre in Reykjavik.

The day-to-day functions of the Department of Civil Protection and Emergency Management of the NCIP include risk analysis, mitigation and co-ordination (i.e. planning, training and equipment) and recovery. The role of the NCIP during emergency operations is to procure and deliver all outside assistance (national or international) for a stricken area, which is deemed necessary by the local Chief of Police. 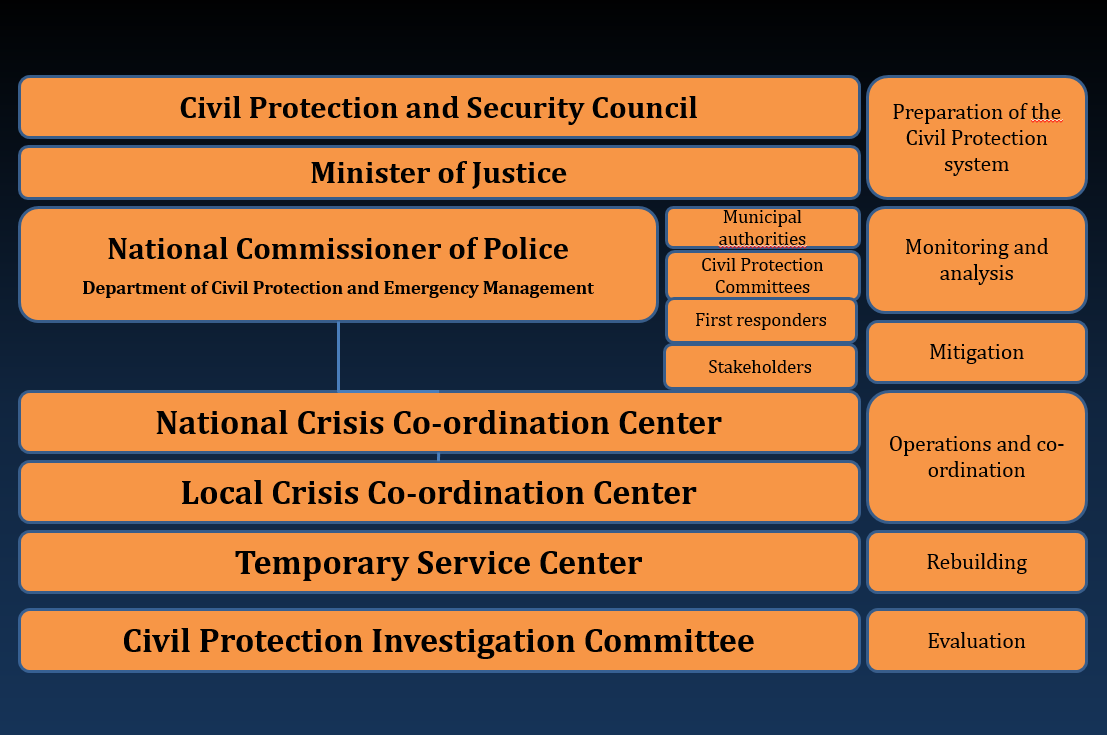 Government policy on civil protection and security is drawn up by the Civil Protection and Security Council for periods of three years at a time.

In the Council, government ministers, their secretaries, local authorities, heads of critical infrastructure sectors, Civil Protection organizations and stakeholders meet to set the Civil Protection policy for three years at a time.

Policy on Civil Protection and Security for the years 2015 – 2017 has 42 Action plans, for actions before, during and after disasters and protection of critical infrastructures. The NCIP guarantees that measures are taken in accordance with the Government’s civil protection and security policy.